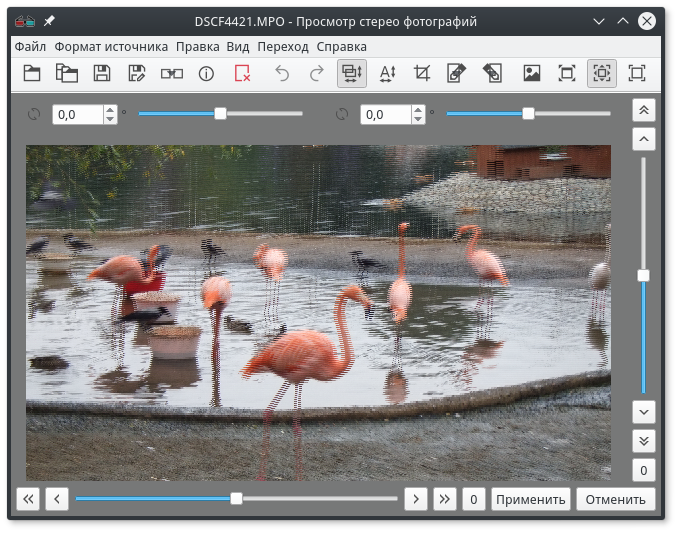 The vertical slider on the right and the “Up” and “Down” keys are used for vertical alignment.
For horizontal-slider at the bottom of the screen and “Left” and “Right” keys.
If you press these keys together with Ctrl, the angles will move in big steps.

If camera angles are taken from hands, you may need to rotate the camera angles. This is done using sliders and spinners at the top of the image.

For horizontal alignment (parallax settings), the object that will be visually located on the plane of the screen must be equalized so that on the left and right angles, it was in one place of the screen (not twofold). In this case, the objects behind it will be perceived by the eye as if they are behind the screen, and those objects that are in front of it - in front of the plane.

The left eye image on the protruding objects is to the right of the image for the right. That is, to view them you need to keep your eyes to the nose. For comfortable viewing, it is recommended not to allow too much distance between images of the same part at different angles (severe ghosting).

Vertically, you just need to combine the left and right angle so that the objects are on the same level.

Once you have achieved the desired result, click “Apply”.

Then, use the mouse to select a square area on the image, which will be visually located on the screen plane. To change the size of the area, use the mouse wheel.

Click the left mouse button. The program will search for key points in the selected area and align the image with them.

This tool is launched via the menu “Edit” → “Extended Auto Alignment” or by Ctrl+E,A keys.

The program finds similar key points in the images and calculates the required amount of vertical, horizontal, and angle shifts. The Alignment tool described above is then opened.

In the menu “Edit” → “Settings…” you can choose which parameters will be calculated automatically: parallax, vertical displacement, rotation.

3. Adjust scene depth at key points.
Select a timestamp on the timeline where the distance has finished decreasing and adjust the desired scene depth for it using one of the alignment tools. Repeat the same at the point in time when the distance starts to increase.

As a result, during playback, the depth of the scene changes smoothly as the camera changes the distance to the object.
The result can be saved to a new video file.

Select the desired region of the image and click button “Crop”.

In the lower pane, you can also select the desired aspect ratio of the frame. 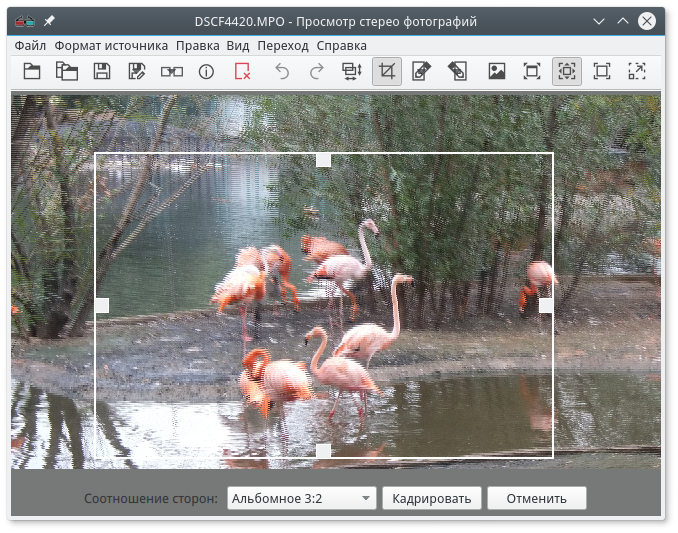 Editing angles in an external editor

This function can be useful, for example, to remove red-eye in an external editor.